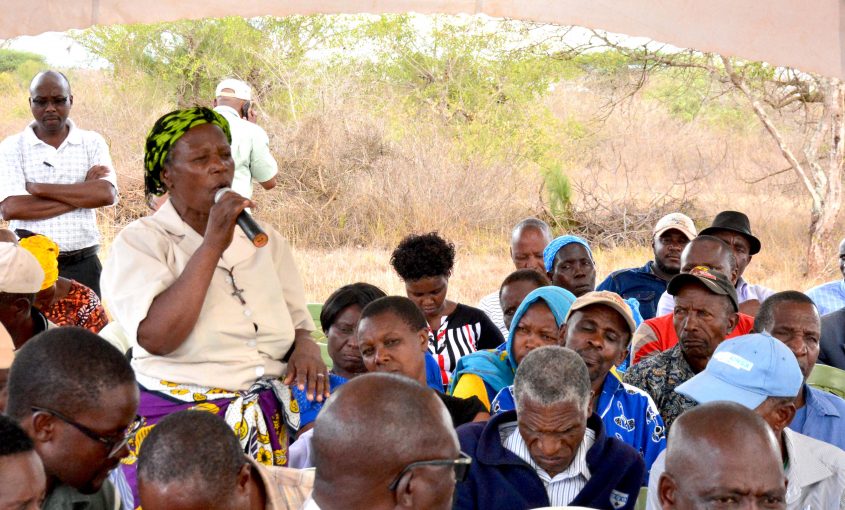 Achieving gender equality and ending gender-based violence is a goal many organisations strive for across Kenya. There have been countless programs in the education, health, business and government sectors to promote gender equality as a critical tool towards attaining Sustainable Development.

In the conservation sector, where there is less meaningful engagement, conservation NGOs have in the recent past increased its attention on gender issues and the important role of women’s inclusion in conservation programs and projects. The community conservancy model is lagging in addressing gender equality.

During a Community Land Act 2016 awareness session in Amboseli, Josphat, a 43-year-old father of five and chairperson of one of Amboseli’s conservancies, was perplexed by the information shared on women’s participation in community land management committees. “It is unheard of to have women attend men meetings. Women do not own land, hence cannot attend land-related meetings” he says. Unfortunately, Josphat sentiments resonate with the majority of male conservancy leaders in the country.

The social norms, practices, and beliefs held by men such as Josphat contribute to women’s marginalisation in conservancies through exclusion and discrimination, locking out women from accessing and benefiting from conservancies, despite their reliance on conservancy land and resources for their daily needs.

Since 2015, KWCA has strengthened conservancy landscape associations and individual conservancies on their governance and management capacities. Gender equity is one of the fundamental principles of good governance but addressing it proves to be a big challenge for various reasons. Firstly, there is a lack of goodwill from conservancy leaders to include women in national and landscape level conservancy meetings. Secondly, there is low percentage of conservation funding allocated towards supporting gender mainstreaming in community led conservation projects and thirdly, patriarchal institutional mechanisms within communities in conservancies bestow power and privilege to men.

Recognising the need to address the low participation of women in conservancies, KWCA with support from the American people through USAID Resilient, Inclusive, & Sustainable Environments (RISE) project partnered with Fauna & Flora International, CARE International in Kenya and the Centre for Rights Education and Awareness to tackle the harmful social norms that hold women back from participating in conservancies.

The project is working to improve KWCA’s capacity to prevent GBV and promote gender equity within conservancies in Kenya, and serve as a resource for regional associations and member conservancies. KWCA has recruited a gender officer to oversee the gender programme and support in the review and implementation of the current gender strategy through the USAID RISE project.

In addition, the project is using CARE International’s Social Analysis and Action (SAA) tool to facilitate self-reflection on deeply held norms and beliefs among the staff and board of KWCA, TTWCA and Kasighau conservancy to promote more gender-equitable alternatives.

In June 2021, a gender audit carried out by KWCA revealed glaring gaps in its publications, policies, and communication materials. Since the audit, KWCA has begun to address these gaps in the current work plan and some of the action plans delivered. During KWCA’s Annual General Meeting held in June 2021, the National Conservancies Women Forum, which advocates for women’s inclusion and advises KWCA on gender issues in conservancies, was adopted and formalised in the KWCA Constitution and will now have a permanent seat in the National Conservancies Council (NCC).

Changing attitudes one at a time

KWCA staff and board have reported attitude change at a personal and programmatic level due to the SAA training they have received. Project officers have made it compulsory to include women in project activities; more staff are aware of gender insensitive language on social media and reports on gender. The senior accountant reported having learnt more about gender norms and how they can contribute to GBV: “The gender roles, as identified through the 24 hrs cycle tool, are cultural, and it’s what we have grown up knowing. However, there are some women’s roles that as a man, I could consider supporting to relieve of duties from my wife and for my female colleagues in the office.” He said.

In Kasigau conservancy, the board chairperson, shared his reflection post SAA training “When I arrived home after the SAA training, I found my wife was not well, I helped out with the household chores – that is unlike me. This resulted to my children questioning my actions. The training has made me aware of my own personal bias.”

In October 2021, the RISE project received a cost extension of  US$174,801 from USAID Kenya and East Africa Environment office to deepen and leverage the actions and impacts of the current RISE support to KWCA, and further strengthen its gender capacity including increased support to TTWCA to develop a “model” of good practice on gender issues for landscape level conservancy associations. The project will further carry out a gender and power analysis in Kitirwa conservancy in Amboseli to identify gender and social norms that hinder women from participating in conservancy activities.