Commentary: From crisis to solutions for communities and African conservation

Home » News » Commentary: From crisis to solutions for communities and African conservation

Commentary: From crisis to solutions for communities and African conservation 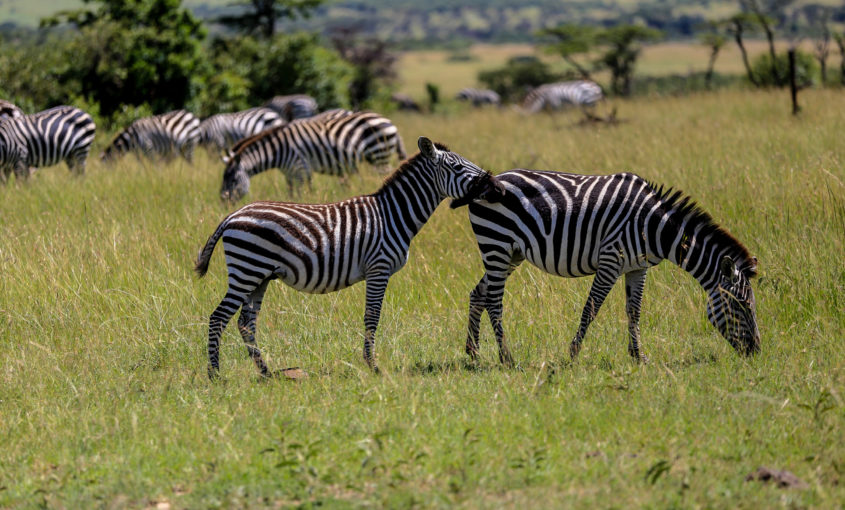 This commentary was first published by Mongabay on 20th May 2020. It is co-authored by Dickson Kaelo-CEO of the Kenya Wildlife Conservancies Association, Daniel Sopia- CEO of the Maasai Mara Wildlife Conservancies Association, Damian Bell -Executive Director of Honeyguide, based in Tanzania, Richard Diggle-Business and CBNRM Specialist with WWF in Namibia and Fred Nelson -CEO of Maliasili.

The coronavirus (covid-19) pandemic has created a profound crisis for conservation efforts in eastern and southern Africa as a result of the sudden cessation of all international travel in a region where nature-based tourism and conservation are closely interdependent.  The region’s unique wildlife populations and other natural assets — centered on spectacular landscapes such as the Serengeti and Okavango — underpin a multi-billion dollar ‘wildlife economy’ that has surged in recent decades. The growing economic value of wildlife tourism across the region has helped spur governments, private landowners, and local communities to all make growing space for wildlife through conservation areas and investments.

One of the most important regional trends is the expansion of conservation initiatives on community lands, often as a result of the interest by local people in creating new economic opportunities from wildlife tourism.  In Kenya, local conservancies created by private or community landowners now span over six million hectares, an equivalent land area to the entire extent of the country’s national parks and reserves. A recent World Bank report found that these areas earn about $12 million annually from tourism, while helping build a national tourism industry that accounts for about 9% of the country’s GDP. Around the Maasai Mara, Kenya’s most important wildlife area, over 14,000 Maasai landowners earned nearly $5 million last year from lease fees paid by tourism ventures operating on about 15 conservancies.

Namibia, which created communal conservancies in the mid-1990s as a way to grant rights over wildlife to rural communities, now has over 16 million ha — about 20% of the country’s total land area — in these locally managed wildlife areas.  These conservancies have played a key role in the recovery of the country’s wildlife, including the tripling of its elephant population since the early 1990s, and in catalysing tourism investment and other wildlife utilisation in remote rural areas. Communal conservancies generated roughly $11 million in returns and benefits from wildlife, and over 5,000 jobs, in 2019.

Other countries, such as Tanzania, are also recording important progress and evidence of wildlife recoveries in community-managed areas. Ultimately nearly every country in the region depends on local communities valuing wildlife and supporting conservation, if the large landscapes and free-roaming wildlife are to persist as a unique feature of eastern and southern Africa.

It is against the backdrop of growing regional momentum for community conservation that the current crisis is unfolding. In the near-term, the loss of  nearly all tourism revenue may lead to a near-term surge in poaching and illegal wildlife use, and potentially the conversion of private and community conservancies to alternative land uses. In the longer term, the crisis poses major challenges around the economic model that has driven conservation in eastern and southern Africa over the past 20 years, and its future viability.

The way that conservationists respond to both the near-term crisis and the longer term implications of the unfolding pandemic will be pivotal for the future of Africa’s wildlife. The stakes are high not only in conservation terms, but for billions of dollars of economic investment and future opportunities related to tourism and other nature-based enterprises.

As in any crisis, the pandemic creates urgency for conservationists to be creative and responsive, even while overcoming the many practical challenges that have accompanied the public health measures instituted over the past two months.  The crisis is also an opportunity to question inherited assumptions, refine existing models, and improve conservation practices. While it is still early in the response, a number of important themes are emerging from the crisis that may help mitigate near-term fallout, but also ultimately pave the way for a more resilient approach to conservation efforts across the region.

Even before the current pandemic, conservationists working in eastern and southern Africa were increasingly concerned about the need to diversify revenue sources for communities from wildlife beyond tourism, to encompass a wider suite of nature-based products and enterprises. A recent report from the Luc Hoffmann Institute documents a range of different models for generating conservation incentives, and is even more timely in light of the current loss of tourism revenue.

As a recent Mongabay article featuring Carbon Tanzania’s work describes, new markets such as forest carbon that can diversify incomes from conservation efforts beyond wildlife tourism can be a key part of negotiating the current crisis and laying the basis for more resilient nature-based economies.  Other innovative measures to link external payments to wildlife conservation outcomes, such as camera trapping payment schemes or the ‘wildlife credits’ initiative in Namibia, also need to be refined and expanded.

Despite the current collapse of tourism, the tourism sector cannot be written off, as its resilience and capacity to rebound presents an opportunity for the future. However, tourism models need to be rethought and redesigned to maximise benefits for conservation and local economies.  The pandemic’s disruption, as well as the likely future constraints on travel from climate change, creates pressure for the kind of high-value, low-volume tourism models that countries such as Botswana have championed.

Critically, not all community conservation initiatives depend on commercial economic values as the main driver of local stewardship.  Thousands of indigenous and local communities around the world protect their territories due to a combination of cultural values and locally rooted livelihoods.  In East African savannahs, wildlife living outside national parks and protected areas lives alongside pastoralist communities’ livestock, and in landscapes that have long been managed through indigenous grazing systems.  Conservation initiatives that build on these locally-rooted land management practices, such as those in Kenya’s South Rift Valley, are inherently less reliant on tourism revenues and more grounded in local communities’ day-to-day livelihoods.  Strengthening these links between pastoralist livestock production, rangeland management, and wildlife conservation- and amplifying the value of healthy rangelands to livestock in these savannah landscapes- will make community conservation areas more resilient.

Moreover, the current crisis is a reminder of the importance of local ownership and rights in the design of community conservation ventures. Namibia’s communal conservancies were originally premised not entirely on material values, but on the post-apartheid social justice imperative of returning ownership of wildlife to local communities who had been dispossessed of those rights by a colonial regime, just as took place all across Africa during the colonial era.  Devolving rights over wildlife and other valuable natural resources back to local communities has proven to be a major political challenge across Africa, sometimes resulting in tendency to avoid these deeper governance issues and focus primarily on economic values and benefits. But the current crisis, when government resources for law enforcement will be stretched to the breaking point and local community decisions will largely determine conservation outcomes, highlights the importance of giving communities greater legal authority for making those decisions. The current crisis is an opportunity for conservationists to return to a greater focus on these core issues of legal and policy reform and local ownership over wildlife and other natural resources.

To solve the challenges facing many conservation efforts, diverse actors such as local communities, government agencies, researchers, businesses and NGOs all need to come together to develop shared solutions. With the right leadership, the pandemic could lead to improved relationships and lasting new collaborations that in the longer run can achieve the kinds of large-scale changes that conservation needs.

For example, government, conservationists, and private tourism interests in Namibia have come together quickly to develop strategies to address the massive loss of tourism and trophy hunting revenue for conservancies and the potential unemployment of thousands of community game scouts, as well as local tourism lodge employees. This has built on Namibia’s strong long-term partnerships between government, leading local Namibian conservation organizations, and international groups such as WWF.

Similarly, in Kenya government and civil society leaders have been meeting frequently to develop collaborative and coordinated responses to the crisis. In the Maasai Mara, where local conservancies face the loss of millions of dollars of income, private tourism companies, grassroots organisations such as the Maasai Mara Wildlife Conservancies Association, and international funders have rapidly come together to develop an emergency response that aims to keep the conservancies afloat through a range of financing structures.

The pandemic highlights the importance of having long-term financing for conservation efforts that are not solely dependent on month-to-month tourism revenues. While there has been a rapid growth in long-term conservation trust funds around the world over the past decade, there are relatively few that support community areas on a meaningful scale. In Namibia, the Community Conservation Fund of Namibia was recently launched to fill that gap, and provide long-term financing for conservancies. The crisis has similarly brought a similar conservancies financing mechanism — called for in the 2013 Wildlife Conservation Act — back onto the government agenda in Kenya, as policy makers now recognise the critical importance of conservancies in places like the Maasai Mara to a national tourism industry worth over $1.5 billion annually.

More broadly, navigating the crisis will require African governments to provide greater public investment in tourism and wildlife, in order to enable the sector’s recovery over time. Wildlife tourism delivers huge value in jobs, tax revenue, and wider impacts across the economy, but tends to receive very little public investment. While creating new targeted financing mechanisms, as with the Namibian and Kenyan examples, is ideal, governments can also more easily remove financial disincentives, such as high levels of effective taxation of community wildlife ventures, which have long constrained such initiatives in countries like Tanzania and Zambia.

As the pandemic unfolds, the ability of critical conservation initiatives on the ground to adapt and sustain Africa’s unique wildlife will depend on collaborative local efforts coupled with strong national leadership from both civil society and government. Even while the focus remains on near-term mitigation of the most pressing threats, such as a rise in poaching and human-wildlife conflict, conservationists in Africa need to look at the crisis as an opportunity for strengthening existing models, mindsets, and investments in conservation. Approached in this way, the crisis could lead to more resilient and effective strategies for lasting conservation of the region’s wildlife.