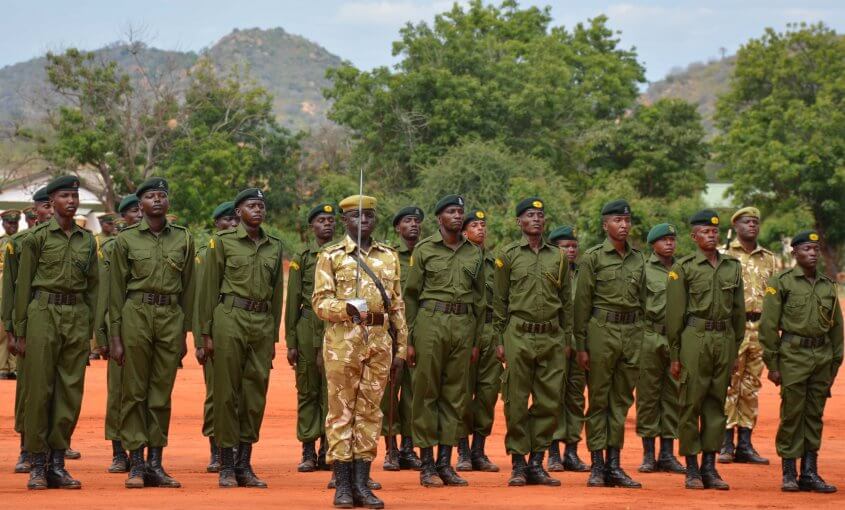 60 community conservancy rangers among them two women,  are the first trainees to benefit from the newly revised community conservancy rangers curriculum at the Kenya Wildlife Service Law Enforcement Academy (KWS LEA) in Manyani, Taita Taveta County. The rangers were drawn from Olgulului Olarashi group ranch, Eselenkei, Naboisho, Mara North, Lumo and Kamungi conservancies. The course was developed and later improved to equip community rangers with the necessary skill sets needed to enable them work more effectively and efficiently with the communities.

The review meeting noted that the curriculum had a bias towards wildlife management, as content on community engagement was inadequate yet in practice, conservancy rangers’ duties extend beyond problem animal control and anti-poaching to include rangeland management, grazing planning and conservancy resource monitoring.

The revised curriculum validated by the conservancy ranger’s representatives during a meeting held on March 6th 2018 at Manyani, Taita Taveta County, addressed this concerns by integrating additional content that includes techniques for engaging community members and partners which requires soft skills such as negotiation, communication, and mobilization expanding the facilitated external lectures. KWCA’s  Wildlife Scouts Standard Operating Procedures (SOPs) were also incorporated as training materials and KWCA officially included in the curriculum as a training resource entity.

During their graduation day on June 7th 2018, KWS LEA Commandant Dickson Lesimirdana confirmed that the revised curriculum had been piloted and improved the skills sets for community rangers. ”I was impressed by the passion and commitment exuded by the community rangers during the training. He said. What remains now is for KWS to carry out a follow up exercise to ascertain that the training is creating impact in the conservancies and to identify if there are more skills gaps .”

KWS Deputy Director, Parks and Reserves Mr. Michael Kipkeu, who presided over the graduation, lauded the partnership between KWS and KWCA in strengthening conservation efforts in community areas and reaffirmed KWS’s interests in ensuring the community rangers and KWS rangers worked more closely, shared information and reinforced each other.

“This collaboration is the reason why poaching levels in the country continue to decrease.” He cited. Mr Kipkeu challenged the graduates to carry out more education awareness in the communities “As ambassadors for wildlife conservation, you have a responsibility to ensure Kenyans own and appreciate the wildlife so that we can reverse wildlife declines.”