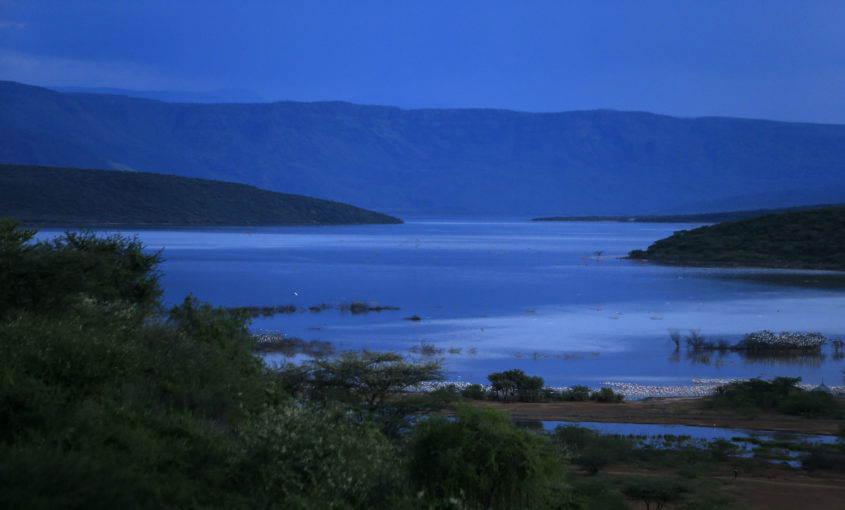 The conservancy model approach is not only securing biodiversity in Baringo County, but its also improving community’s governance structures and enhancing livelihoods

At the edges of the iconic Irong Hill, to the north and overlooking the Geysers at L. Bogoria, a visitor is treated to a calm serene environment. The sound of birds chirping away, colourful butterflies, Dik-diks run into a nearby thicket and the sound of bees buzzing from the Acacia trees, shows the richness in biodiversity. Rock hyraxes can be heard as you climb the rocky hill where caves and other archaeological features are found. The beautiful scenery of the lowland below, stretching through the Perkerra irrigation scheme, lies what can be described as a panoramic landscape.

However, despite its beauty, the upper midland catchment of the wildlife rich L. Bogoria, has been plagued by decades of environmental destruction. As early as a decade ago, the 2007-2012 L. Bogoria management plan pointed to the risk of collapse to the lake ecological processes, as catchment wide unsustainable natural resource exploitation,  poor land use plans, overstocking and unsustainable farming systems, drove communities to abject poverty and wildlife towards extinction.  According to a 2019 World Bank report, Baringo county is among the few counties that have experienced 85% wildlife loss in the last four decades. In addition, frequent climate change induced floods and extensive harsh drought has made life difficult to the community around the world famous wetland. Lake Bogoria National Reserve which is a RAMSAR site and an Important Bird Area with over 350 bird species is at risk of relegation.

Komen Joshua, knows all too well how the landscape has changed over the years. The 45 year old, clinical officer turned conservationist was born and raised in Kapkukui, near the Irong forest,

“ growing up in the forest, there were many giraffes, zebras, and gazelles roaming freely in our homestead, predators such as lions, leopards and hyenas were often spotted and those areas designated as a “grass bank”  during drought seasons for livestock. The land faces increased human habitation, high demand for charcoal and  decreasing wildlife populations .” He says.

In 2007, while attending a chief’s baraza– public meeting, Komen was inspired by a conservation story of Samburu communities told by the village elders in Kapkukui who had visited the region. “the elders called them conservancies, a term  I had never heard off  but sounded hopeful for the community and environment.” He says.

Komen embarked on a journey of self-learning and gathered as much information about conservancies from the elders and through online sources. While establishing Irong Community Conservancy to secure the forest, Komen faced backlash from the community.  Some, became suspicious of the model while his found it beneficial. “ the communities members from the other four locations adjacent the forest felt excluded. to secure the forest i had to strategise and seek more support for the conservancy.” He says. Komen managed to mobilise county administrative officers from the 5 locations adjacent to the forest and the community to register as members. In 2015, Komen was was elected unopposed and a 15 member management committee comprising of three representatives from each location set up to start the process of restoring biodiversity.

However, since its establishment in 2010, Irong conservancy which covers 1,000 Ha. has not made much progress. It is listed as an emerging conservancy by Kenya Wildlife Conservancies Association (KWCA)  due to unclear land tenure, under-developed governance structures and management capacity to fully operationalise and support biodiversity restoration and livelihoods.

The process of strengthening the community conservancy started in 2019 after a recent collaboration between local communities and the Baringo County government to reverse the likely demise of Lake Bogoria ecosystem received a boost from GEF UNDP Small Grants (SGP) programme towards supporting community conservation and livelihood initiatives. The Baringo County Governor, H.E Stanley Kiptis launched the Kshs 81.7 million grant to 26 organisations and community groups to secure the Lake Bogoria landscape. For the first time Irong conservancy and the adjacent Kiborgoch and Chuine community conservancies were among the beneficiaries with KWCA, providing technical support to develop their governance and financial management capacities, land tenure rights and livelihoods engagement. Through the grant, the three conservancies are supported to establish their land area, undertake land use planning and prepare management and business plans to prepare them for a journey to realise benefits from better management of their natural resources.

Komen was among the 10 participants from Lake Bogoria landscape visiting Samburu county for the first time on a learning visit to Namunyak and Kalama Conservancies. He became motivated by the observations made to these landscapes where conservancies are more advanced. Surprisingly,  the two Samburu conservancies had been established the same time as Irong conservancy  “they had made so much progress in 10 years to become these formalised institutions with clear governance structures collecting revenue from tourism to support communities.” Komen says shockingly.

Additional training on good governance and financial management facilitated by KWCA, resulted in successful democratic elections held in October 2019, where Komen was re-elected unopposed to serve for another 3 years for his passion, determination and vision for the conservancy. Since then, the conservancy has had several success like initiating mapping of the conservancy rangelands and the greater Kudu migratory corridor and recently finalised the plans for the establishment of a camp site facility. They are working to engage a private sector partner to market the conservancy nationwide. Direct support to the conservancy has re-awoken interest, not just around Lake Bogoria but through the entire County. The conservancy is working with Baringo County Conservancies Association (BCCA) to scale up some of the impacts to other conservancies in the county. BCCA coordinates conservancies in the county and supports their growth to deliver environmental conservation and livelihood goals.

Komen’s vision is to ensure the conservancy is delivering environmental and economic benefits to his community. Together with his management committee members, he has developed a 3 years plan whose priority is to establish a camp facility for domestic and international tourist. Komen is optimistic about the future and believes he has set a good example for conservation stewardship. His term will expire in 3 years and he is confident of the governance structures and by laws the conservancy has adopted .

“I have set the foundation which was the hardest part,  I am comfortable that when my term ends I will I will pass the baton and provide mentorship for the incoming leadership because leaders abide to the principles of governance.” He says.

This #WorldEnvironmentDay we celebrate Komen and so many other people like him who are #ForNature and the at the forefront of community-led conservation working to protect Kenya’s natural heritage and wild places.