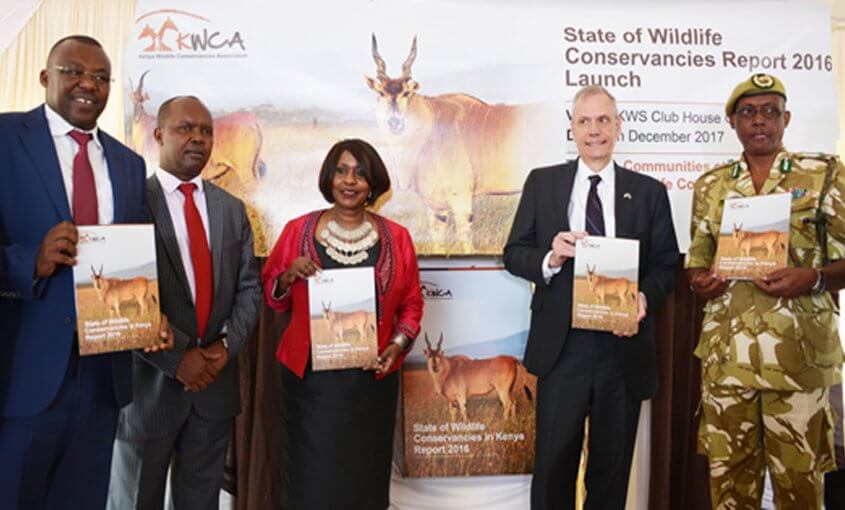 “The success of KWCA is in its cooperation with other regional wildlife conservancies associations and the coordination of conservancies to achieve meaningful impact.”

This is what Francis Nkoitoi, the chairperson of Maasai Mara Wildlife Conservancies Council said on behalf of community landowners at the launch of the first national State of Wildlife Conservancies Report 2016.  When KWCA came into being in 2014, many conservancies lacked the collective voice of engaging government on policies affecting conservancies.  For the last 4 years, the organization has been working to fill this void, playing a catalytic role with its far-reaching policy development agenda of creating an enabling environment for conservancies to thrive.

In 2016, arguably KWCA’s most important policy work was publishing the state of wildlife conservancies report. The report which acts as a baseline for measuring conservancies achievements thus far, provides an opportunity for conservancies to gain national and international recognition to enlist support from Kenyan and partners.

The report shows there are now 160 conservancies covering 11% of Kenya’s land mass, 89% of which is managed by communities with a further 2.4million Ha proposed. It highlights the institutional capacity of conservancies in different programmes beyond just wildlife conservation and tourism to include peace and security, livestock management, land and natural resources management.

Overall the report confirms that conservancies have gained a seat at the decision-making table and through KWCA are using its collective voice to marshal political support for engaging government and other stakeholders to support environmental protection in the country. For example, conservancies have used its large and influential political constituency to advocate for wildlife policies that enable conservancies to thrive such as the enactment of the Wildlife Act 2013 and the draft Wildlife Policy 2017. Conservancies have also been recognized as an important stakeholder in the development of the National Wildlife Conservation and Management Strategy of which KWCA is a member of the Synthesis committee involved in the drafting of the strategy.

Speaking at the launch of the report, Mr. Stephen Manegene, the Wildlife Director at the Ministry of Environment and Natural resources who are working with KWCA in the development of the National Wildlife Conservation and Management strategy said, “we are excited to be working with KWCA where for the first time we have an entry to consult communities on wildlife conservation.”

The Cabinet Secretary Environment and Natural Resources Prof. Judy Wakhungu, said conservancies in Kenya had gained global recognition for positively impacting communities and protecting biodiversity hence the reason why the ministry had been focusing on laying a strong policy and legal foundation for the growth of conservancies. She added that the report was important towards the preparation of the National Wildlife Status Report as envisaged under section 50 and 109 of the Wildlife Conservation and Management Act 2013. Wakhungu said conservancies had demonstrated their effectiveness and had great potential for the development of communities in the far-flung areas where wildlife is often seen as an opportunity to offer benefits beyond conserving wildlife. She gave the example of Masaai Mara landowners who had benefitted through land leases and were earning a monthly income from conservancies through lease fees paid by tourism investors for allocating land towards wildlife conservation.

The United States Ambassador, H.E Robert Godec reiterated the importance of involving communities in wildlife conservation “Kenya’s wildlife is extra ordinary and I commend the work done by different stakeholders in protecting it, but it is also important that communities benefit from it, have jobs and opportunities to be able to progress and conservancies are making this difference.” He said.

The State of Wildlife Conservancies report was published under the Community Conservancy Support Policy program support by USAID Kenya and The Nature Conservancy. The findings and recommendations will be significant in informing national and county policies, strategies and plans and guide conservation partners in supporting the growth of conservancies in Kenya.