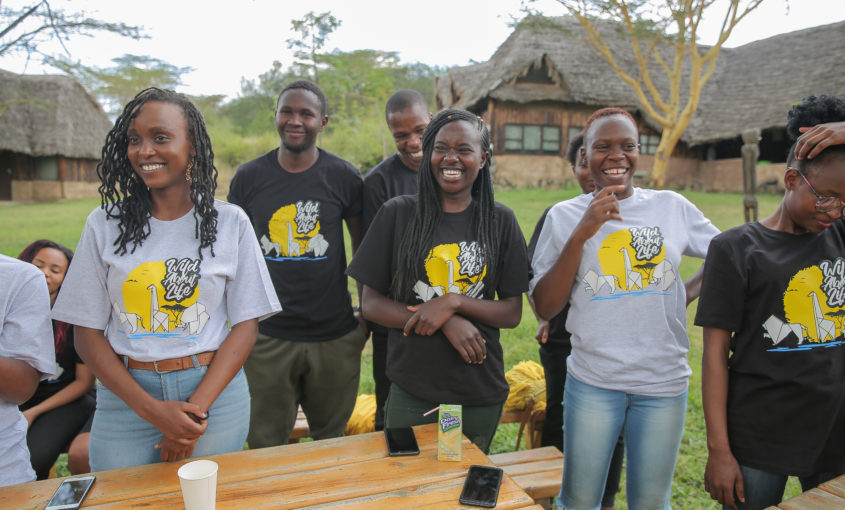 KWCA in collaboration with Uvumbuzi Africa and the Kenya Wildlife Trust (KWT), partnered with Light Art Club on a social media campaign dubbed #WildAboutLife to enhance knowledge on wildlife conservation in national parks and conservancies and promote domestic tourism among the youth.

The campaign was launched on 3rd March to commemorate World Wildlife Day with 53 youth among them, upcoming social media influencers and university students participating in a fun-filled game drive through the Nairobi National Park and Naretunoi conservancy where a picnic conversation was held on the role of youth in conservation and opportunities for engagement.

The visit to the park was a first for majority of the youth despite growing up in Nairobi. Antony, from light Art  was among those visiting the park in over 20 years. “ the last time I visited here was through a school trip, I was six years old.” He says

In December 2019, Antony and his team were inspired about wildlife and immediately carried out a random survey among the youth on the big five and found out that among the 50 youth interviewed, the majority could not name all the big five. According to a study conducted by Well Told Story and commissioned by Escape Foundation on youth participation in conservation that young people feel detached from nature and the environment, KWCA and partners embarked on sensitisation journey to engage the youth in conservation and other environmental protection initiatives.

To enter the one week ‘wildaboutlife’ competition,  the participants had to produce and share one minute videos expressing their love for nature and their interest to visit a conservancy by tagging KWCA, Uvumbuzi Africa, Kenya Wildlife Trust and Light Art Club social media platforms.

The upcoming social media influencers created and promoted content for their followers to encourage them to participate in the competition for a chance to win a 2 night’s stay for 2 at either Eagle View Lodge in Naboisho Conservancy-Mara, Porini Amboseli Camp at Selenkey conservancy and Il Ngwesi Eco camp and conservancy  in Laikipia.

Using social media’s wide reach as a tool to communicate and compel the young generation to engage in conservation,  it became apparent that amongst the youth, only a handful took part in conservation activities or visited parks and conservancies.

According to Antony, “social networks are effective in peer influence, we have very talented young people who can influence other young people to change behaviours and attitudes for the common good,”

Among the social media influencers who participated in the campaign is Diman. An upcoming comedian who has over 70,000 followers on Instagram. “ I was excited to see rhinos, warthogs, and zebras. It was an amazing experience I don’t think I would ever think of coming to this place were it not for this campaign.  He says.

Diman is among 50 young people who committed to use his platform to promote wildlife conservation during a picnic conversation on conservation activity at Naretunoi Conservancy “As a comedian, I can use my comedic skills to sensitive my followers on conservation. This whole experience has made me realise that many young people are missing out on what the country can offer.” He says.

Samantha Nyakoe, a student and an upcoming social media influencer did not know about conservancies “ I never heard of conservancies until I was involved in this project. I am amazed that there is a beautiful serene place just a few kilometers out of Nairobi that young people can come and spend time with wildlife. She says. I am inspired by the sacrifices landowners have made to conserve wildlife for the sake of future generations.” She adds.

Samantha together with light art staff members Sam Thuku and Judy Mugechi travelled to Oserengoni conservancy in Naivasha for a one night stay at their Chui Lodge where they held a chat with the conservancy Manager to learn more about their sanctuary and conservation efforts in the region.

The social media campaign was a great success. It received a lot of interest from young people increasing KWCA’s social media presence among the youth. Thanks to our partners and sponsors; Basecamp Explorer, Gamewatchers safaris and Porini Safari Camps, Il Ngwesi Conservancy and Oserengoni wildlife sanctuary for providing complementary tickets to the three winners to stay at their luxurious camps and learn more about conservancies. The stories of the winners were documented by 8 young photographers and videographers who did not have any expereince filming and shooting wildlife photos.

The first winner, Christine Kopiyo a young mother travelled with her 7 year daughter to Basecamp Explorer’s Eagle view camp in Naboisho conservancy in the Maasai Mara. Her story showcased a great example of positive socialisation and influence from a parent to a child to think conservation.

Lilly Wairu, the second winner travelled to Porini Amboseli Camp in Selenkay Conservancy. Lilly travelled with her best friend who had been going through a rough time. Lilly reminded us that nature is therapeutic and gives the feeling of freedom.

Rose Ian the third winner travelled with her sister to Laikipia at Il Ngwesi Eco-lodge and conservancy. His love for wildlife was cultivated at a young age and fed his curiosity of the wilderness by watching documentaries on National Geographic and the Big Cats Diary. It was also a perfect opportunity to celebrate his birthday in nature.

KWCA’s strategy on youth engagement aligns with Kenya’s wildlife strategy which highlights the need to engage young people in conservation, build their recognition of the value of wildlife and embrace their role in conservation through collaborative initiatives such as awareness raising activities.